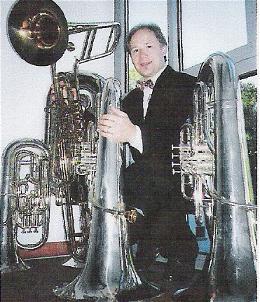 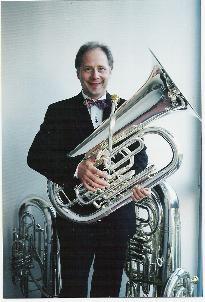 One of the most important factors in the life of a musician is his/her choice of instruments. It is a factor which can decide success or failure. During my life as a musician I have had the privilege of trying out a variety of exceptional instruments. However, for my personal use, my choice always seems to be those built by the Swiss company Hirsbrunner : brilliant in tone yet solid in volume, versatile and responsive, offering an inexhaustable wealth of sound colour to the player. I also now own a Yamaha F-Tuba. These are the instruments I own and play :

F-Tuba HBS-388 I like to play both in the orchestra and for chamber music. However it is also a fantastic solo-instrument - my constant companion!

BB-Tuba HBS-193 This instrument is the traditional big-size "German Kontrabasstuba" - destined for the orchestra.CC-Tuba HBS-510Corresponds to the typical American orchestral sound, which is rapidly becoming the modern European orchestral tuba sound. Flexible and voluminous.

Euphonium-HBS-479This instrument has a brilliant character, full of solid tone and exceptional intonation.

The CIMBASSO which I play - sadly all too seldom - was made by Thein in Bremen.

Mouthpieces : I used exclusively the custom made original gold Schmidt mouthpieces built to perfection by Bernhard Schmidt in his Markneukirchen workshop.